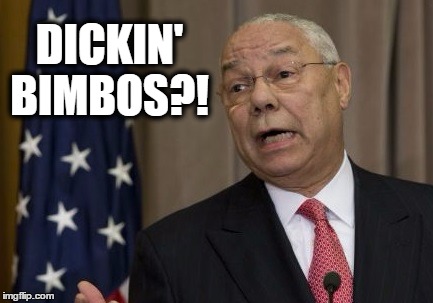 The latest DNC Leak consists of extremely honest emails coming from General Colin Powell. In them the general calls Donald Trump “a national disgrace.”  He also says Hillary is working herself to death, looks tired, and “for good reason comes across as sleazy.” He says he would rather not have to vote for Hillary despite having great respect for her. He then says Bill Clinton is “still dicking bimbos at home.” I do not yet have confirmation that anyone on the planet besides General Colin Powell uses the phrase “dicking bimbos.” Is that old English? …So at the end of the day, according to Colin Powell America gets to choose between a racist national disgrace for President and a tired, sleazy woman with a bimbo-dickin’ husband. …So I guess we haven’t learned anything NEW per se.

To watch my segment on Redacted Tonight about this, CLICK HERE.

1/3/2018 by John F. O’Donnell   There’s a creepy company out there called Alphonso. They have software that…
byLee Camp
7 comments

4/5/2018 by Eleanor Goldfield As tax day looms, most of us are grumbling and griping about the joyless…
byLee Camp
2 comments