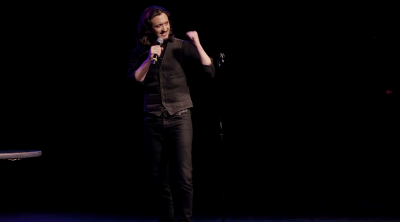 “When surveying the current American comedy landscape, it’s rather peculiar state of affairs, with the bulk of TV’s political comedians being foreign imports – John Oliver, James Corden, Trevor Noah, and Samantha Bee, and so it might seem more than a little odd that one must to go to a Russian channel, RT America, in order to find an full-blooded, authentic domestic raconteur. Enter Lee Camp, a rambunctious new voice for the non-compliant generation, unabashedly flying that rebel standard, and a natural pariah to the establishment. Camp does everything that’s missing in today’s over-crowded mainstream stand-up circuit – proudly eschewing the partisan milieu, and never kowtowing to the narrow conventions of the corporate machine, unlike so many of today’s gelded corporate quipsters. Nor will he be caught tip-toeing around proscribed politically correct lines. And stand-up connoisseurs will appreciate some of the familiar oddities Camp serves up; the political dexterity of John Stewart, combined with the devastating straight up, no-nonsense social probing power of a Steve Hughes. In short, Camp does what all great comedians do: he holds his unique mirror up to contemporary society, and exposes the maudlin pantomime for what it is. Lee Camp has definitely mastered the art of low camp: whether that’s prying the wheels off of military industrial gravy train, taking the two party duopoly to task, breaking down Wall Street’s Ponzi schemes, or simply making the scientific case for the imperishable superiority of the chicken nugget. These days, so few are able to lead their audience through the waist-deep, grisly swale that is 21st century society, but if you’re looking for someone who is both mad and canny enough to navigate that glorious swamp, it has to be Lee Camp.”

To get the new comedy special or watch the first 10 mins for free, CLICK HERE.