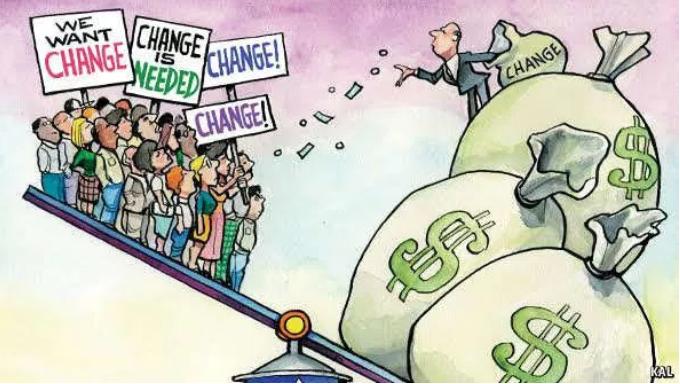 At this point, we should be calling last year, “The Year of the Billionaire,” because a new billionaire was created EVERY TWO DAYS! And no, this is not a sign of a healthy economic system. According to the executive director of Oxfam International, Winnie Byanyima, “The billionaire boom is not a sign of a thriving economy but a symptom of a failing economic system. The people who make our clothes, assemble our phones and grow our food are being exploited to ensure a steady supply of cheap goods, and swell the profits of corporations and billionaire investors.”

Sadly, Oxfam’s latest report on global inequality, Reward Work, Not Wealth, reveals that 82% of all newly created wealth went to the top 1% of the world’s richest, while absolutely nothing – ZERO – went to the poorest 50% of the world’s population. This also translates into the mind-blowing reality that just 42 individuals have as much wealth as the world’s poorest 3.7 billion people. This is not a sustainable system!

When income inequality gets to these levels, there is the strong possibility that entire economies are going to crash. When you have people working longer and harder and making less and less, something has to give. Luckily, Oxfam has some recommendations

1.) Limit returns to shareholders and top executives, and ensure all workers receive a minimum ‘living’ wage.

Yes! This week marks the opening of the World Economic Forum in Davos, where the world’s economic and political elite address the economy’s most “pressing problems.” Why not acknowledge that in 2017 the top 1% took home roughly $762 billion? And then figure out how to reallocate some of that money, which most definitely came from shareholder payouts, to ensure the poorest workers receive a “living” wage.

2.) Eliminate the gender pay gap and protect the rights of women workers.

There is no reason that somebody should be paid less for the same work based upon gender. At the current rate, it will take 217 years to close the gap in pay and employment opportunities between men and women. The World Economic Forum in Davos should make closing this gap a priority.

3.) Ensure the wealthy pay their fair share of tax through higher taxes and a crackdown on tax avoidance, and increase spending on public services such as healthcare and education.

If the wealthy paid their fair share and didn’t use every tax loophole in the book to hide their money, it would go a long way to creating a decent life to the world’s habitually poor. Frustratingly, at least in America, things are going in the wrong direction with Trump’s recent tax reform plan (see: tax scam). But it doesn’t mean we should stop screaming from the rooftops for tax justice in the U.S.A.!

The bottom line is massive income inequality both globally and in the U.S. is only going to continue to get more and more extreme unless the 99% band together and demand that poverty is not an option for anybody.

We Have Society Set Up Wrong – Here’s How

Free Speech Is More Complicated Than You Think
byLee Camp