LEAKED: Head Of FCC Mocks Destruction Of The Internet

Last week, the FCC held its annual “Telecom Prom”- an affair filled with industry executives and employees. The event has a strict no camera policy, but thanks to an anonymous spy, we have a small window into the mentality of our ruling class, to whom public outcry is nothing more than a giant joke.

Let’s break down the most horrifying moments of Mr. Pai’s 28-minute speech:

00:20 – Pai jokes that in preparation for this event, he crowd-sourced the joke writing process and received 22 million jokes, 7 million of which were fake submissions by bots. Here Pai is alluding to the enormous number of fake comments submitted to the FCC to drown out the public’s cry in support of continuing net neutrality.  (One can assume these bot-driven comments were created by the big telecoms or their allies.) Yet even this joke drastically low-balled the ratio of fake responses to genuine ones.  Jon Fingas writes that out of the 22 million comments, “… only 800,000 appear to be genuinely original — and 99 percent of the real comments support net neutrality.” New York State Attorney General Eric Schneiderman wrote  “… the FCC has refused multiple requests for crucial evidence in its sole possession that is vital to permit that law enforcement investigation to proceed.” This could even lead to lawsuits.  That the FCC fails to remedy this outright fraud and follow a legitimate process should be illegal, yet Pai’s audience has no problem cackling at the notion of Pai ignoring an overwhelming majority of the country.

00:00 – Pai sarcastically discloses that Sinclair Broadcasting is sponsoring the event, citing the “must-run content” Sinclair distributes to the local news stations it owns. This reference is to Sinclair’s conservative-leaning programming, and it elicits a wave of laughter from the room because Pai paved the way for Sinclair’s proposal to merge with Tribune Media when the FCC stopped limiting the number of TV stations broadcasters like Sinclair could buy. The Sinclair/Tribune merger, which we covered on Redacted Tonight this past May, and John Oliver’s Last Week Tonight tackled this past July, would extend Sinclair’s reach to 72% of American households. The FCC is expected to approve the deal, despite the fact that both sides of the aisle are arguing it will give the merged company “far more reach into American households than the law allows.” But Pai and those in attendance think media consolidation is a riot.

00:43 – Since corporate control of information is a real knee slapper, Pai makes another bid for laughter by presenting his edition of the  “Distracted Boyfriend” meme: “How do you choose between your longtime love and your newfound crush?” he asks, displaying himself holding hands with Verizon, while eyeing Sinclair. Here Pai blatantly acknowledges his complicity in allowing a major news monopoly to control even more TV airwaves. The crowd finds the destruction of the media landscape very amusing.

01:10 – A little later, Pai asserts that the White House can’t influence the FCC. “Who do you think we are, the Antitrust Division?” he cracks. When this joke prompts a groan, he defends himself against his offended audience of elites and responds, “I used to work there, I’m allowed to make that joke.” Thus Pai has inadvertently confessed to YET ANOTHER conflict of interest – former employment at the corrupt antitrust unit of the Department of Justice, which is MEANT to be the government’s way to protect consumers against predatory business practices. What could be funnier than a government systematically screwing over its people at the behest of big business??

02:26 – Then, in a tongue-in-cheek response to the question of how a former Verizon lawyer became head of the FCC, he presents a homemade skit of a conversation between a Verizon executive and a young Ajit Pai. 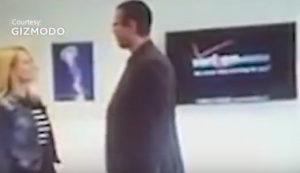 The person playing the Verizon executive is actually Kathy Grillo, the real-life current senior vice president of Verizon. “As you know,” Grillo begins, “industry has captured the FCC, but we don’t feel it’s captured enough.” She explains that “we [Verizon] want to brainwash and groom a Verizon puppet to put in as the head of the FCC.”  But in reality. Verizon didn’t need to “brainwash” Pai. They simply promote those who act as their faithful foot soldiers. “This is going to take 14 years,” Grillo continues, with a line meant to make you laugh at how ridiculous this “conspiracy theory” of a plan would be. Of course, what they won’t say, is that the telecom industry didn’t need such an elaborate strategy. They simply make political donations (READ: bribe) to get what they want. When enough government officials are on their payroll, they can appoint and confirm whoever they want, and Ajit Pai’s history proved he would be complicit in whatever they needed done. This was not some crazy scheme hatched 14 years ago. It’s just corporations taking over the levers of the state. You don’t need a formal conspiracy when interests align. So Pai rose up the ranks and had full support from the telecom industry when he was at the FCC. This is how industry “captures” regulatory agencies, but pointing this out appears to be merry entertainment to those on the inside.

While not surprising, it’s sickening to see the conflict-of-interest greed monsters who run this country outwardly laugh about how corrupt they are. The video makes my blood boil because it’s a perfect look into the psychology of the elite. The fact that telecoms essentially dictate the policies meant to keep them in check is a mere detail.  Our protest is hilarious to them, and criticism of a regulatory agency captured by special interests is something to be mocked. The telecoms just trashed net neutrality rules. Call your Congresspeople to demand they block the FCC vote.

(If you liked this article, join our email list in the sidebar for free.)

What You Aren’t Being Told About Hacking Voting Machines

Our voting machines are a joke. They’ve been easily hackable for years. But almost all of them are…
byLee Camp
2 comments

As you likely know, there are ongoing protests to stop the construction of the Dakota Access Pipeline in…
byLee Camp
13 comments