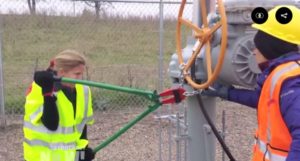 Ten climate activists were arrested after successfully halting the flow of tar sands oil from Canada to the U.S. Not only were the activists arrested, but so was the journalist filming the event – Deia Schlosberg. She was also a producer on Josh Fox’s film “How To Let Go Of The World And Love All The Things Climate Can’t Change.” Sources tell me authorities plan to charge Schlosberg with very serious crimes even though she was only reporting on the incident. For those who are unfamiliar, Freedom of Press is the FIRST Amendment to the Constitution. Apparently Schlosberg’s video footage was also confiscated.

This is only a few weeks after journalist Amy Goodman with Democracy Now was charged for filming the Standing Rock protest against the Dakota Access Pipeline. We live in very dangerous times indeed when authorities arrest and prosecute those reporting on corporate crimes.

To learn more and donate to the defense fund of these brave activists, please go here – www.shutitdown.today/

Okay, every once in awhile I get to brag. Today there’s an article from Salon.com about satire and its…
byLee Camp