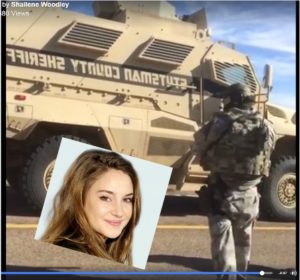 Actress Shailene Woodley, known for her roles in the movies like “Divergent,” “Snowden,” was arrested by heavily armed police in North Dakota while peacefully protesting with others against the Dakota Access Pipeline. She was live-streaming the events on Facebook when the arrest occurred despite the fact no protesters were armed or violent. According to the video SEEN HERE, she was the only one arrested even though many others were with her and she went to leave when the police instructed her to do so. When the officer was questioned as to why only she was being arrested, he said simply, “You were recognized.” This seems to mean that she was arrested because she’s a public personality or because she was live-streaming to 40,000 viewers. As can be seen in the video, the authorities are very heavily armed with semi-automatic rifles on their chests and MRAP vehicles. 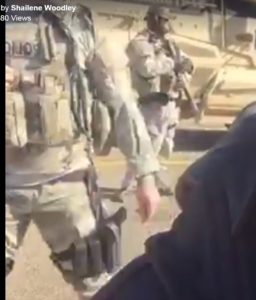 Keep in mind that these “soldiers” are protecting the corporate profits of an oil pipeline against the peaceful protests of the actual citizens they’ve sworn to protect. We now live in a country where the corporations are protected first and foremost, and the citizens are put under arrest for trying to protect their own land.

The MRAP says on the side “Sheriff.” Clearly we are no longer in the days of the Andy Griffith Show. Chances are the MRAP was acquired by this county sheriff via the 1033 Program of the National Defense Authorization Act which allows localities to acquire excess weapons of war from the Pentagon. Basically our communities are preparing for war not against some foreign power, but against us, regular American citizens. In this case they were used to “take down” a young woman armed with a smart phone.

I interviewed Shailene Woodley on my show “Redacted Tonight.” You can watch that HERE.

To get news like this in your inbox for free, just sign up for the newsletter in the sidebar to the right. You can also text the word ‘REDACTED’ to 444999. It’s free.

While most of the mainstream media talks about nothing but Donald Trump grabbing pussy (which is deplorable), they…
byLee Camp
13 comments

January 31, 2017 By Kit O’Connell Are you feeling overwhelmed by the pace of Donald Trump’s dismantling of…
byLee Camp
No comments