BREAKING: New Proof The Election Was Rigged Against Democrats! 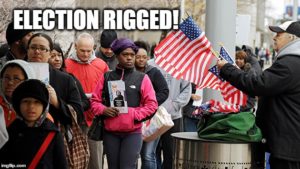 I just talked with two election experts – Greg Palast and Mark Crispin Miller – both incredibly accomplished in their fields. They agreed that this election was indeed rigged, and even though it has been Donald Trump spouting off about election rigging, perhaps he didn’t realize that the machinery was in place to rig it in HIS FAVOR. Greg Palast estimates that 1.1 MILLION people, mainly minorities, were knocked off the voting rolls in swing states using a system called “Cross Check.” That system accuses people of being “double voters” even though there is absolutely no proof. Cross Check is used in 30 Republican-led states. On top of that, Palast discovered that ballot protection software on the new Ohio voting machines was TURNED OFF. Election law expert Bob Fitrakis actually took Ohio to court last week to make sure the ballot protection software be turned ON. However, the judge sided with the state and said to leave it OFF on election day!

Professor Mark Crispin Miller agrees with Palast, saying that this election was stolen from the Democrats in a similar fashion to 2000 and 2004. And this is not coming from a fan of Hillary Clinton. Miller pointed out that Hillary Clinton is a neo-liberal who was intent on continuing to gut the social safety net and allowing the big banks to run wild. But that doesn’t mean we shouldn’t have a fair election. Furthermore, this is not just about the Presidency. This election theft impacts congressional and gubernatorial races as well.

I strongly believe that if Hillary Clinton – and the corporate Democrats in general – had ACTUALLY stood for something, then people would’ve had a reason to stand with them. This is why Bernie Sanders would’ve won this election easily. (He would’ve beat the margin that was stolen.) People believed what Bernie Sanders said, and that’s why he attracted an enthusiastic following. Even most Hillary voters didn’t take her at her word. Her actions proved that she supports trade deals, supports war, supports weapons contractors, supports oil and gas, and supports the big banks. If the left ever wants to win again, they need to start TRULY standing for something, rather than just feeding people lies while enriching themselves.

The two interviews mentioned above will air tomorrow night on Redacted Tonight: VIP. At 6pm ET tomorrow they’ll also be posted to YouTube.com/RedactedTonight.

52 responses to “BREAKING: New Proof The Election Was Rigged Against Democrats!”