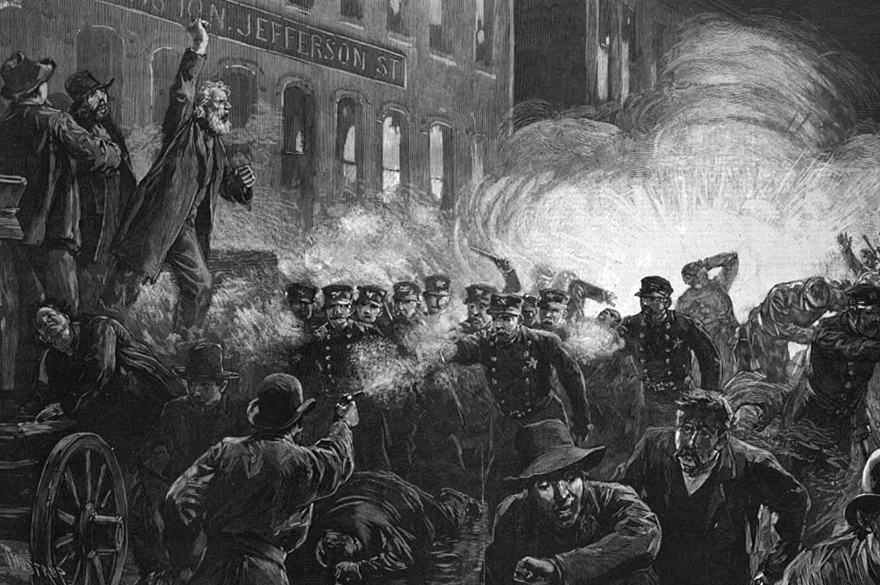 60 years ago, President Eisenhower proclaimed May 1st Law Day. According to the American Bar Association, it was to be “a national day set aside to celebrate the rule of law.” Even compared to the more frivolous holidays, this one seems particularly arbitrary. How does one celebrate Law Day? By high-fiving a lawyer? For once not crossing the street on red even though the coast is clear? The truth is, no one celebrates it. And even for those who first constructed and proclaimed it – celebration wasn’t the point. Rather, the point was to cover up and malign those who demanded justice over an oppressive and violent law and order. With this new day proclaimed, the powers that be could spray-paint “Commie” on the fight for worker’s rights so that all who labor here fall in a capitalist line, afraid of being thought unpatriotic if they demand justice. In the midst of the Cold War, Eisenhower and his Red Scare buddies tried to red-wash and smooth out the jagged edges of a powerful day when people rose up against the same powers that were now trying to erase their stories from history. But that weak palimpsest couldn’t fully erase those stories – and they spread, like bleeding ink that couldn’t be contained. With this, new stories were written – ones that crossed borders and time; another line on the front lines of worker’s rights movements worldwide.

Today, International Worker’s Day is officially recognized in 66 countries. In the U.S., while some cities have long-standing May Day traditions, those stories faded by Cold War scrubbing have yet to be fully claimed by their own country. But with the burgeoning teacher strikes, the ongoing Fight For 15 and other labor-centric initiatives, we see that our history is alive in our present. The wounds of yesterday are still open and people are more and more unwilling to be bled dry for the greed of those up on high. Tensions are high, getting higher, and the gaping chasms between the haves and have nots, the oppressors and the oppressed, the rich and poor – are more and more visible to those on the losing side. It’s getting harder for the powers that be to make excuses for gross inequalities. The pressure of oppression is reaching a breaking point – and the question is, who will break? This is precisely why it’s so important that we know our history, own it, learn from it and grow from it. If we do not, we are walking blind and unprepared into the future. 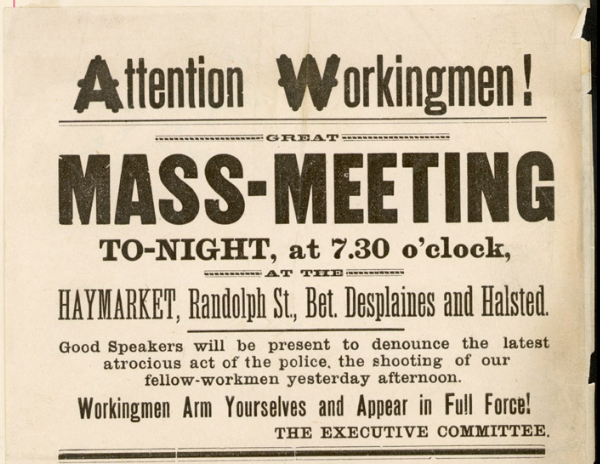 On May 1st 1886, more than 300,000 people walked off their jobs across the US. After years of pleading and appealing for an eight hour work day and safer working conditions only to be met with Pinkerton’s beatings and continuous harassment, workers had had it. Chicago was the epicenter of this fight and would become infamous for what is now known as the Haymarket Affair – or the Haymarket Riots. On May 4th, a public meeting was called to address the police brutality dealt out during the previous days of striking. By this point, nearly 100,000 workers in Chicago had walked off their jobs. At Haymarket Square that evening, a crowd of roughly 3,000 gathered to hear comments by anarchist organizers, workers – even the Mayor of Chicago was in attendance. The crowd showed no signs of rowdiness, but continued resolve was apparent. As the meeting wound down, cops began to roughly disperse the crowd and shortly thereafter, a bomb was thrown into the police ranks. No one knows who did it but blame quickly fell on anarchist organizers. Some suggest the culprit was a police agitator trying to get the police to fire – which they of course did. Some eleven people died and upwards of 100 were injured. Eight anarchist organizers were tried and four were hanged – not so much for their actions but rather their political beliefs. Only three of the eight people tried were even at Haymarket when the bomb was thrown. The goal was, as we’ve seen with trials such as Huey P. Newton’s and Leonard Peltier’s, to make an example of dissidents. Anarchy was finding a foothold in America – and someone would have to hang for that. 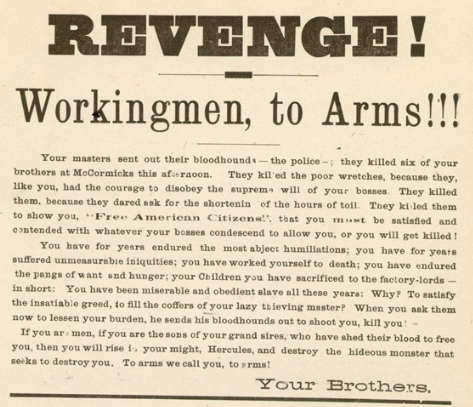 Today, anarchy is once again finding a foothold – a tentative one, but a foothold nonetheless. Hanging might be passé but the targeted character assassination, surveillance, harassment and infiltration of radical and anarchist organizations such as the Common Ground Collective is still very much in style. Most Americans couldn’t tell you what anarchy is but they know they don’t like it. They know it’s unAmerican and dangerous – just like communism – or is it socialism? Oh whatever, they’re all the same, right? Of course they’re not. And of course all three have strong American traditions and roots. That’s why we’ve been taught to hate them – because we belong to their legacy. And that legacy threatens the status quo that prompted strikes 132 years ago as well as today. They all share a common belief in the rights of the people over the right to profit, therefore they are all damned. And in their damnation lies the shards of a leftist movement that won you your right to a weekend, your right to 40 hours a week. In their damnation lie the lessons we were never taught but need to know. 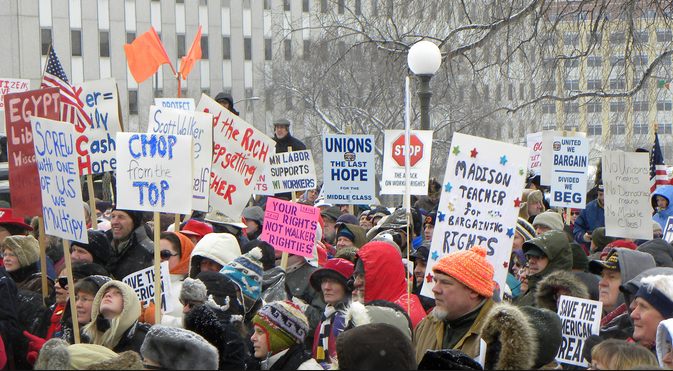 The history of our struggle as the 99% has been washed with McCarthyist rags – stained with the propaganda of a system dead set on profit at any price – paid by both people and planet. This is dangerous. It is a disservice to those who gave much, some who gave all, but it also handicaps our current fights. Without history to explain the present, we build on foundations we know nothing about, rehashing old mistakes, unaware of what worked and what didn’t. As our movements grow, as we find the connections in those faded pages of our collective past, let it actively dictate our future. Instead of letting the ones who erased our history erase our potential future, let’s consider the past – so that we can build the future we, the people, want.

For more on May Day, check out my interview with IWW and SA organizer Alka Mysore.

If you liked this article, you would like our new podcast “Common Censored.” It’s free on  iTunes, Spotify, Stitcher, or HERE.

Also, reporting like this only exists ad-free because of supporters like you. Chip in what you think this was worth in the sidebar to the right. Thanks! 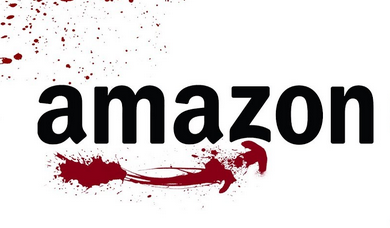 Over half of Congress are millionaires. The candidate who spends the most money on their campaign wins 91% of…
byLee Camp