States Take Fight To Defend Net Neutrality Into Their Own Hands 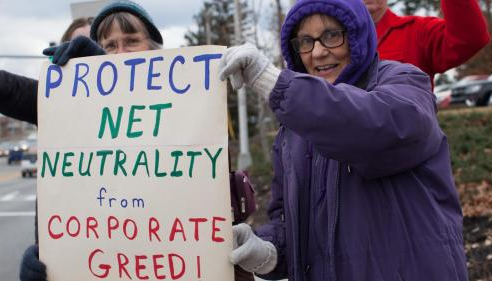 With free and fair Internet on the line, a couple of state governments refuse to “wait and see” whether or not Congress will reverse the FCC’s net neutrality repeal.

A week after 21 states and the District of Columbia filed lawsuits against the FCC,  Montana became the first state to enact its own net neutrality rules. Governor Steve Bullock signed an executive order on Jan. 22 that prohibits Verizon and other internet service providers (ISPs) with state contracts from blocking, throttling or creating fast lanes for certain websites.

Two days later, New York followed Montana’s lead. New York Governor Andrew Cuomo’s executive order also prevents state agencies from making deals with ISPs that don’t preserve fair Internet and prohibits them from charging higher rates to use certain applications. In short–you don’t have to shell out extra bucks each month to send a selfie to your friend on Snapchat.

These state governments are tapping into the what groups like Free Press and Fight for The Future have been broadcasting: The net neutrality repeal further deregulates massive telecoms that own the corporate media outlets and helps crush independent and alternative voices that are critical to cultivating and promoting movements like Occupy Wall Street and Black Lives Matter. Small business owners—for whom conservatives regularly claim to be looking out–will suffer from the lack of web traffic that larger companies can afford to pay the big bucks for. While ISPs are no stranger to violating net neutrality in the past, FCC’s repeal of Title II protections is the most wide-reaching telecom power grab.

The Senate only needs one more vote for a resolution to undo the FCC’s decision, but there’s still a Republican-held House of Representatives to tackle afterward. And remember, it took a minute for all of the Senate Democrats to come on board, which speaks to the power of the telecom industry’s influence.

It’s time to stop banking on our bought-off federal lawmakers and start pressuring our slightly less bought-off state lawmakers to fight back against big telecom’s spinning wheel of death.

(Our reporting is being suppressed by Facebook, Google, and YouTube. But we keep fighting thanks to heroes like you becoming sustaining members for as low as $5 a month – the same you might pay for a single cab ride. You can also give one-time donations or sign up for the free email newsletter in the sidebar to the right. )

Until recently, cops in Denver were confiscating life-saving equipment like sleeping bags and tents from area homeless people. On Saturday, Denver Mayor Michael Hancock promised to let the homeless keep their tents and blankets during cold weather months. An upcoming “polar vortex” is expected to usher in dangerously cold, below-zero temperatures in Denver.
byLee Camp
2 comments