You’ve probably heard of the Dakota Access Pipeline protests that are currently going on in North Dakota in order to stop a multi-billion dollar oil pipeline from destroying the land and water in and around Standing Rock Reservation. An oil spill from that pipeline could taint the only water source of millions of people. I covered the protests a couple weeks ago on Redacted Tonight. Well, this past weekend private security for the pipeline company ASSAULTED protesters with pepper spray and ATTACK DOGS! In this video from Democracy Now, you can see it happen, as well as the bites protesters received and blood in the dogs’ mouths. Ultimately the protesters stood their ground – causing the security team and the construction workers to leave, but not before many people were bitten and hit with pepper spray. One other interesting note – There have been dozens, if not hundreds, of police present on most days in order to “protect” the pipeline from the protesters. (That’s right – our police are now defending inanimate corporate objects AGAINST the citizens who pay their salaries.) However, you’ll notice in the video that there were no police around during the dog attacks.

It appears you can donate to the Standing Rock Sioux Tribe and their effort to stop the pipeline HERE. 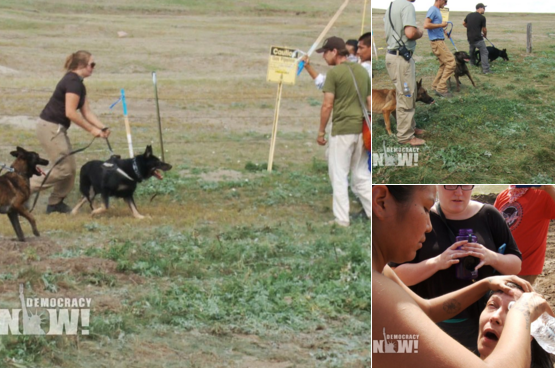 1/9/2018 by Eleanor Goldfield We are drowning – literally and figuratively. We are figuratively drowning in a vapid…
byLee Camp