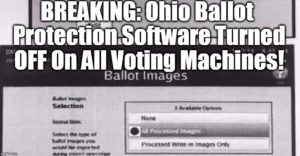 This is almost too incredible to believe. The Ohio voting machines now have ballot protection software on every machine. It allows an image to be collected and stored for every ballot cast. New York Times best-selling author Greg Palast is reporting that the protection software has been TURNED OFF on every single Ohio voting machine! After all the chaos that has gone down in Ohio elections, why in God’s name would they turn off the protection software?! Well, you might think, “Maybe it’s an accident.” …NOPE. In fact they were taken to court over it by Bob Fitrakis, and according to Palast, the Republican Secretary of State argued that it would take a MASSIVE effort to turn on the software. …But in fact, it’s a simple drop-down menu. The judge ruled in the Secretary of State’s favor. Apparently protecting our vote from fraud is just TOO MUCH TROUBLE.

(To get these news updates in your inbox, sign up in the sidebar to the right. It’s free.)

UPDATE: New Proof The Polls Are LIES And Third Party Candidates Should Be In The Debates!

In order to get into the Presidential debates, the third party candidates need to be polling at 15%…
byLee Camp
7 comments

1/5/2018 by John F. O’Donnell The cryptocurrency evangelists and the big banks have something in common – they’re…
byLee Camp
No comments

3/6/2018 By John F. O’Donnell Don’t hold your breath for any sort of gun control reform or DACA…
byLee Camp
5 comments