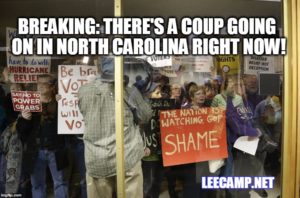 Inside the North Carolina House, protesters chanted as police arrested them one by one.

For the second day in a row, the chambers were cleared and the public was banned from viewing a legislative coup in progress.

The North Carolina GOP, facing the defeat of incumbent Gov. Pat McCrory on November 8, are doing everything they can to hold onto power, even if it means literally rewriting state law. Such is the decaying state of American democracy in 2016. You may remember that the North Carolina GOP are the same state party that some Democrats raised money for after a fire during the election, out of a sense of fairness. In return, the NC GOP is rewarding their generosity by setting fire to the very fabric of democracy.

House kicking all members of the public out of gallery for second day in a row. #ncga #ncpol pic.twitter.com/yvoeFKIQJG

Even after his defeat, McCrory refused for weeks to concede the election to current state Attorney General Roy Cooper. It was a brazen attempt to force an electoral crisis that, if it had lasted long enough, would have allowed the legislature to overturn the results and reinstall McCrory.

Now, with McCrory officially on the way out, the Republicans are determined to change the laws to take away as much of Cooper’s power as they can. Using the suffering of Hurricane Matthew victims as a pretext to call a special session of the legislature, the North Carolina GOP instead introduced a host of hastily written bills that would require Cooper get approval from the (Republican-controlled) State Senate for all his cabinet appointments, slash the number of employees that report to the Governor by one-fifth, and even strip power from the progressive state Supreme Court.

Activists, progressives, and just plain decent people celebrated McCrory’s defeat, after he championed an agenda of austerity and repression. The final straw appeared to be the so-called “bathroom bill,” which infamously banned transgender and gender-nonconforming people from public restrooms while simultaneously blocking minimum wage increases and blocking lawsuits for discrimination in the state.

At least one member of the media, and even a historian, were among those arrested last night as the special session began. The people are back today, expressing their displeasure at this ongoing GOP attack on their fundamental rights.

The courts may end up having the last word: Governor-elect Roy Cooper has promised to sue over the Republican “power grab” and organizations from the ACLU to the NAACP are expressing their extreme displeasure at the move.

In the meantime, as the oligarchs fight over their power, it is the average people who suffer. This makes the Tarheel State a disquieting omen of what’s to come nationally in the next four years.

(If you appreciate important breaking news like this, please become a member for as little as $5 a month – You’ll find it in the sidebar to the right. You can also sign up for free newsletter updates in your email box – also in the sidebar.)

June 5, 2017 by Lee Camp A new study out of Oxford and Yale shows that Artificial Intelligence…
byLee Camp
3 comments

12/29/2017 by Lee Camp Activist Erica Garner has died after a heart attack on December 27th. This was…
byLee Camp
One comment