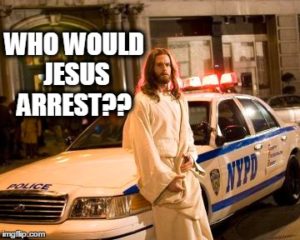 A megachurch in Alabama could soon begin hiring its own cops.

Approved by the Alabama Senate on April 11, civil liberties experts are warning that the move will mark a major escalation in the growth of the American police state if, as expected, it’s also approved by the House and Governor Kay Ivey.

Briarwood Presbyterian Church, located near Birmingham, isn’t just one of those over-sized churches with a bunch of giant flat screen TVs and its own coffee shop. With 4,100 members, and 2,000 students in its own K-12 school, church officials claim neither deputies from two neighboring counties nor private security are enough to keep their religious community safe.

The Alabama chapter of the American Civil Liberties Union are among the groups raising the alarm about this dangerous development, which they say threatens the separation of church and state guaranteed in the First Amendment to the U.S. Constitution.

“What the bill attempts to do is to take what is a quintessential governmental power—law enforcement—and vest that police power in the hands of a religious institution,” said Randall Marshall, legal director at the ACLU of Alabama, in an April 12 interview with Newsweek.

Briarwood Presbyterian is notably conservative and notoriously anti-choice, which means the proposal is also causing concern for local advocates of women’s rights, according to Rewire, a nonprofit focused on sexual and reproductive health, rights, and justice.

“It leaves me to wonder things like, if church members from this church decide to go protest outside of a clinic, does their police force come with them?” asked Danielle Hurd, a state organizer with Unite for Reproductive and Gender Equity (URGE), in an interview with Rewire’s Amy Littlefield published April 14.

The bill has been vigorously defended in the media by A. Eric Johnston, who is both the bill’s author, the church’s lawyer, and a religious extremist apparently bent on transforming America into a “Handmaiden’s Tale”-style theocracy. As head of the Southeast Law Institute, Johnston has opposed LGBTQIA rights and and abortion access, reported Littlefield.

Johnston was even the author of a ban on “foreign law” that became an amendment to the Alabama state constitution. Since foreign laws never apply on U.S. soil, the ban, like other similar laws, was widely seen as a political gesture meant to threaten Muslims.

Some might consider it incongruous that a man opposed to the imposition of religious law in the U.S. would later support the creation of a church police force, but those people would likely be aliens or perhaps time travelers unfamiliar with the hypocrisy of modern right-wing Christianity.

…For example, what are the odds right-wing Christians will be fine with American Mosques having THEIR own police forces?

Although legal experts are questioning whether the law would pass constitutional review by the courts, little is certain in Donald Trump’s America. Thanks to Judge Neil Gorsuch, Trump’s new hyper-conservative Supreme Court Justice, Alabama’s church police could be just the beginning of a disturbing attack on not just our religious liberties, but our right to be entirely free of religion in our political and personal lives.