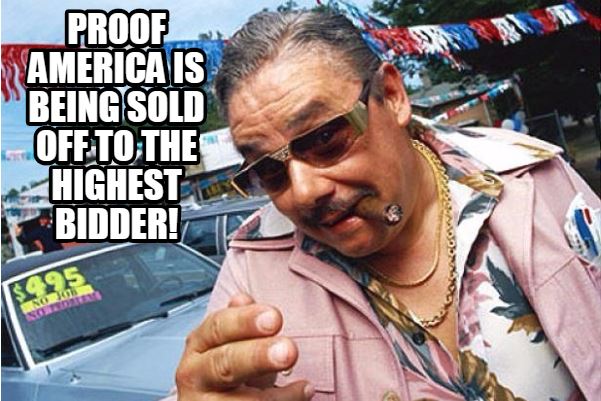 I know this won’t come as a shock to almost anyone, but one of Trump’s key advisers is the CEO of Blackstone. You might not know anything about Blackstone but it sounds ominous anyway. The name feels like when I was 8 years old and first heard Guns N’ Roses’s “Welcome to The Jungle.” I didn’t know who this singer was, nor why he so desperately wanted me to bleed, but it seemed dangerous.

Blackstone is the private equity version of THAT. And they desperately want America to bleed.

This private equity giant – with Donald Trump’s help – is privatizing the US infrastructure. And by “privatizing the US infrastructure,” I mean “buying up the US infrastructure.” While our mainstream media and the Democratic party freak out over McCarthyism 2.0, countries and corporations that are not at all Russian are indeed taking over America. …But they’re not doing it with spies or votes. They’re doing it by simply buying up the country – the infrastructure, the laws and the resources, the Burger Kings and the breweries, the Cheesecake Factories and the factories where they make the Cheesecake Factory cheesecakes. We’re a country up for sale – and in a sense we were always that way. We were founded by people buying and selling slaves while searching for gold to buy and sell. The cultural soul of our country rests on the premise that everything is for sale – and maybe that’s why nobody seems that upset that what remains of the “common good” is being sold off… or should I say “souled off.”

And perhaps you’re thinking, “Well at least Blackstone is based in the US – so at least we’re being bought up by an evil AMERICAN private equity firm.” You’re somewhat wrong. And stop interrupting. …In fact the Saudi Public Investment Fund just announced a $20 Billion investment with Blackstone. And all told, the war chest to purchase U.S. infrastructure comes to $40 Billion. As mentioned, Blackstone’s CEO Stephen Schwarzman is one of Trump’s key advisers – which let’s be honest, can’t be an easy job. It sounds kind of like being the lead math teacher for a wealthy donkey. …A wealthy donkey with a penchant for firing people who are smarter than it.

And don’t worry, the corruption goes much deeper. Trump’s son-in-law and trusted adviser Jared Kushner has a long history with Blackstone, which has given him over $400 million of financing in the past few years. And as Jeff Hauser, director of the Revolving Door Project told the Intercept, “Donald Trump brokering a deal between Saudi royalty and private equity magnates associated with both the Republican and Democratic Party is about as much corruption and self-dealing as can be squeezed into a single sentence.” …Well, let’s hope one day any sentence involving Trump, Kushner and others is 15 to life.

Of course, Rome wasn’t built in a day and America won’t be sold off in a week. The Blackstone/ Saudi deal is just one step in the American fire sale. I reported recently on the hog farms in North Carolina, which hold millions of pigs and produce lagoons of shit that make a smell which could knock out an adult rhino and make even Newt Gingrich blush. Those factory farms got the GOP lawmakers (by buying them off) to pass a bill allowing them to spray pig shit into the air – which then lands on hundreds of thousands of people living nearby, causing them to get sick and exceedingly grumpy. And the kicker is that those massive hog farms are owned by a Chinese corporation that is at least partially owned by the Chinese government. So the Chinese have bought up our pigs and now spray shit on us. Doubt the Founding Fathers saw that one coming. …I realize you could argue that factory farming should be a crime against humanity (well, a crime against pork-anity), but if we’re going to do this horrible practice, I for one want it to be the US to spray OURSELVES with pig shit!

Here’s another quick example of the privatizing (Read: selling off) of America. In 2010 Abu Dhabi bought up the parking meters in Chicago. Basically every time you pay to park on the streets of Chicago, you’re enriching Abu Dhabi. (They’re really hard up for cash and needs your nickels.) And the first thing this wealth fund did was to raise the cost of parking a ridiculous amount – because for some ODD reason the Abu Dhabi Investment Authority doesn’t have a whole lot of concern for the day-to-day lives of the residents of Chicago. Furthermore, Chicago can’t even provide free parking on holidays or close off streets for parades without getting permission. It’s almost as if Abu Dhabi bought the streets of Chicago ONLY for the money! (Gasp!)

And herein lies the problem with selling off every aspect of our country. Corporations and private equity firms don’t give a flying pig shit about the people who use the infrastructure they’re purchasing. Yet, initially at least, the entire point of a national infrastructure was for the common good – roads for everyone to use, bridges for everyone to cross, water for everyone to drink, public pools for everyone to pee in. We’ve lost that promise of a country for all its citizens. In late-stage capitalism the corporations that own the levers of the state use them to squeeze every last dime out of the people. Can you feel it? Can you feel the squeeze like a boa constrictor around your body? Don’t worry, the mainstream media tells us to just close our eyes and pretend it’s a biiiiiiig hug.

Clearly America’s resources and even laws are up for sale. When money rules over politics, there is no safe and healthy future for the average American family. This would be why a large-scale study showed America is now an oligarchy, not a democracy. However, the study did not mention that the oligarchs are now selling America to the highest bidders.

(For more news and commentary like this, join the free email list or become a sustaining member in the sidebar to the right.)

By Kit O’Connell Many countries have made net neutrality a basic freedom. Yet now, the FCC is planning…
byLee Camp

I will take part in the internet blackout tomorrow

I will be taking part in the internet blackout tomorrow to stop the CISPA bill before the Senate.…
byLee Camp

Just read a great article on the continued crackdown on internet freedom, specifically YouTube. (You can read the…
byLee Camp