I decided to fix some of the awful reporting by the NY Times. What you see below is a random sample. I only looked at one page of the NY Times before I picked an article to correct. It’s high time we started seeing our most respected media outlets for what they really are. 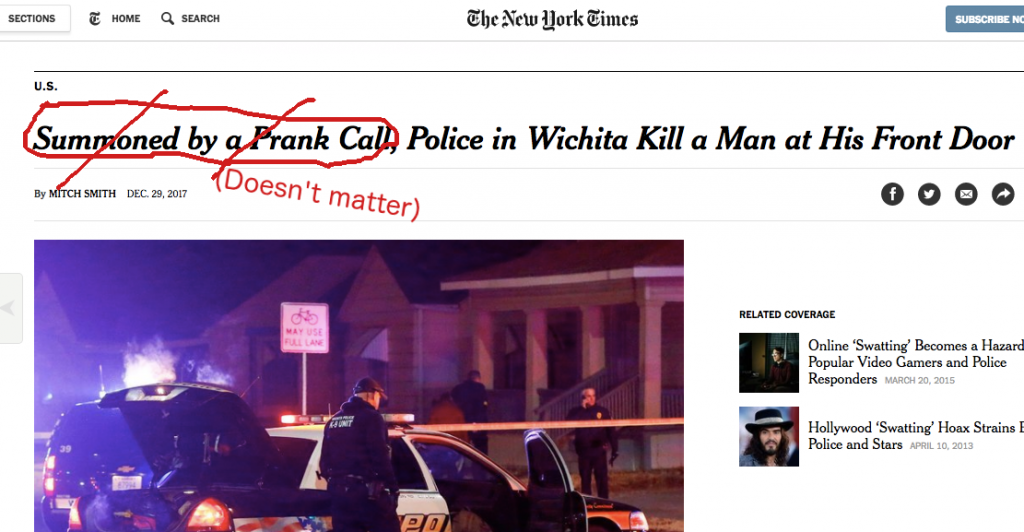 A few days ago police in Kansas were called to a house by a prankster. They shot and killed the man who came to the door. He knew nothing about the prank call. (The term for such pranks is “swatting.”) This New York Times article would have you believe that what really matters in this murder was the fact that the cops were called by a prankster. But in truth, that should be nothing but a side note. 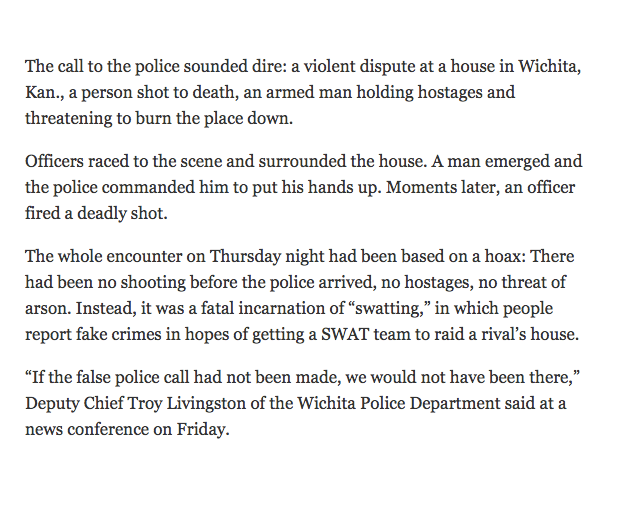 Police get called to scenes they don’t need to be at all the time. It’s not uncommon. Whether it’s because someone thinks their neighbor’s music is too loud or because a mentally ill man is peeing in a fountain. A lot of what the police are SUPPOSED to do is show up somewhere and NOT shoot whoever they see. In fact, that’s MOST of their job. But what the NY Times won’t tell you about policing in America could drown a small town.

In this article, the NY Times won’t tell you that the police in many states receive less training than hair stylists or electricians or just about any skilled jobs. This is one of the reasons they always seem to be killing, injuring, and maiming innocent people. Another reason – which the NY Times won’t tell you – is that many cops (perhaps as high as 25% in cities) are using steroids. And the side effects of steroid abuse are EXACTLY the traits you DON’T want police to have. “The stunning succession of recent front-page examples of police officers who exhibit rage, aggression and/or poor judgment (all symptoms of possible steroid abuse) in confrontations with citizens should ring alarm bells, experts say.”

Yet the NY Times reporter goes with the government/police line that the REAL problem is the pranksters who call the cops. Sure, we shouldn’t like pranksters calling the cops. BUT the real point is – it SHOULDN’T MATTER. If the cops are called to the wrong place, they should be rational enough to figure out, “Hey, there is no crime going on here. Let’s not kill anybody.” 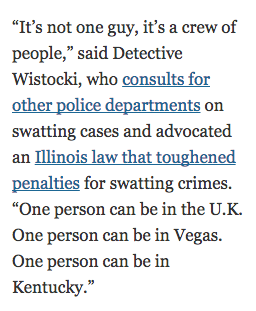 This is the equivalent of a patient dying on the operating table because the surgeon took an hour lunch break in the middle of the procedure. And then afterwards, the hospital said, “We have to increase the punishment for patients who come in during lunch time.”

Pranks will happen. Police will end up at the wrong location at times. That will never change. In fact, police are now being called to houses BY SMART HOME DEVICES! What needs to change is the willingness and/or eagerness of cops to MURDER people whenever they show up somewhere.

The NY Times also does not mention throughout this article that US police killed over ONE THOUSAND people in 2016 (the most recent year with data). If you want something to compare that to, German police killed TEN people in 2015. Your response may be, “Well, the U.S. has more people than Germany.” This is true, but America has only 4 times as many people. So even if you account for the population difference, U.S. cops should’ve killed 40 people in a year. Instead they kill OVER A THOUSAND. They generally murder more people in a week than German cops kill in a year.

The Times reporter also leaves out that police who kill unarmed innocent people, sometimes even unarmed children like Tamir Rice, generally do not get convicted or go to prison. Our police have been militarized and given a license to be judge, jury, and executioner. Furthermore – also ignored by the Times – when the police are caught doing something illegal, they usually arrest the person filming them.

A recent study – which unfortunately was ALSO missed by the NY Times reporter – shows that there are simple steps the police could take to stop murdering so many innocent people. Also, leaked documents show that police unions help protect bad cops even when they continually commit police brutality. The unions have guarantees from the states that police officers will not be disciplined or will only be disciplined lightly. …I guess the NY Times missed that small detail.

They also “missed” perhaps the biggest point when it comes to “swatting.” These prank calls rest on the knowledge that when cops or SWAT teams come to your home – they wreak havoc on your life. There’s a pretty high likelihood they will break down a door and maybe a window, detain you and your family while they question you, possibly arrest you without cause or tackle you if you talk back to them. And god help you if they smell marijuana or see a bunch of beer cans or find out that someone in your family is undocumented. If we had an adult, functional society, police would ONLY be there to help those in need – not to upend the lives of the citizens they have sworn to protect. The sole reason pranking someone by calling the cops on them even works in the first place is because most of us realize how terrible it is to have the cops thrust into your life – whether you’re a lawful citizen or not. Mainstream media outlets intentionally ignore or paint over all of this context.

We are witnessing a bloodbath on our own streets and hack, context-free reporting, like this example from the NY Times, is why Americans are not informed enough to stand up against it.

(If you think articles like this are important, please share it or become a sustaining member. You can also join the free email newsletter in the sidebar to the right.)

In what may be the October surprise Wikileaks was promising, they have just released a massive trove of…
byLee Camp

This is the transcript of a Redacted Tonight Web Exclusive video featuring clips from Fox Business channel. Transcribed…
byLee Camp

1/3/2018 by John F. O’Donnell   There’s a creepy company out there called Alphonso. They have software that…
byLee Camp

In Orwell’s brilliant dystopian novel “1984,” the all-encompassing government has a “Ministry of Truth” designed to decide what…
byLee Camp