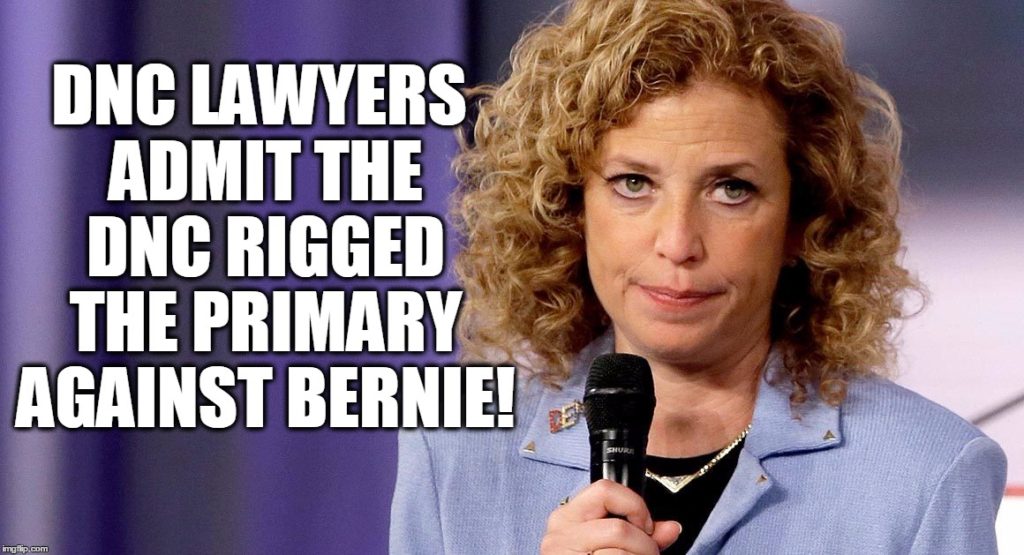 You couldn’t make this up if you tried. As you may have heard, there is a lawsuit pending against the Democratic National Committee (and Debbie Wasserman Schultz) on behalf of Bernie Sanders supporters. I covered the lawsuit on my show Redacted Tonight. The lawsuit includes claims of fraud, negligent misrepresentation, and breaking of fiduciary duties. And of course the DNC was proven to be working with and for the Hillary campaign in recent leaked emails. Now the lawyers for the DNC have fired back by claiming – wait for it – that Bernie Supporters ALREADY KNEW the DNC was in bed with Hillary and yet they donated to the DNC anyway. Therefore, Bernie supporters were not misled. They already KNEW the Democratic National Committee was – against their rules – working for the Hillary campaign. Here’s a quote from the DNC’s lawyers’ motion: “For example, Rick Washik, donated to the Sanders Campaign between February 2016 and June 2016, months after posting a link to a petition that claimed that Congresswoman Wasserman Schultz was biased.” …Yes, folks. We have gotten to this point. The DNC is now saying, “You cannot sue us for being corrupt BECAUSE you already KNEW we were corrupt long ago! We weren’t fooling ANYONE!” This is hilariously disgusting. It’s truly beyond rational thought.

Want to see more journalism like this? Become a sustaining member for as little as $10 a month by clicking here. Or to get info and breaking news like this straight into your inbox, sign up for free by texting the word ‘REDACTED’ to 444999. It’s free and quick.

1/9/2018 by Eleanor Goldfield We are drowning – literally and figuratively. We are figuratively drowning in a vapid…
byLee Camp

1/12/2018 by Michele Greenstein You’ve heard about recent protests in Iran. The most attributed reason for this unrest…
byLee Camp

UPDATE: Only 3% of the pipeline will ACTUALLY be halted – and even that might not be for…
byLee Camp