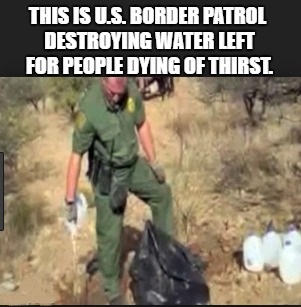 U.S. Border Patrol agents are now literally destroying water jugs left in the desert to save people dying of thirst, many of them children. …Yes, you read that sentence correctly. It’s tough to imagine a culture that could be SO morally bankrupt – but we are now here.

Basically, humanitarian groups such as No More Deaths leave small water supplies for immigrants trying to get across the border. These water stashes can often become the difference between life and death. And leaving these supplies is not endorsing illegal immigration – it’s just trying to save the lives of so many who die of exposure while crossing the border. Whether you personally agree with the U.S. immigration policy or not, you should still have the solitary drop of human empathy it would require to NOT be okay with hundreds dying of thirst in the desert while trying to find a better life.

Yet a new report says that thousands of gallons of water are destroyed by U.S. Border Patrol agents each year. Many of the first-hand accounts and video of the water destruction were documented between 2012 and 2015, meaning this is not a new problem. It has certainly ramped up under the Trump Administration but it existed before.

Destroying these water stashes is the equivalent of knocking food out of a starving man’s hands and watching him die. Are we as a culture really SO morally blind that we think destroying water supplies is the “legal” or “right” thing to do? At the end of the day, this is not an immigration question. This is a question about our society. What do we stand for anymore?

To support the important work of No More Deaths, go here.

(Our content is being suppressed by Facebook, Google, YouTube, and Twitter. To support articles like this one, become a member for the cost of a single cab ride per month. You can also join the free newsletter in the column to the right.) 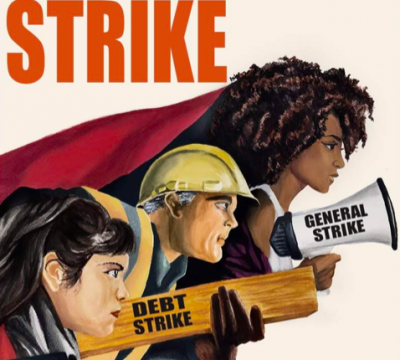