In December 2017, Twitter released new rules against violence and physical harm on their platform. Included in those rules is a focus on “Accounts that affiliate with organizations that use or promote violence against civilians to further their causes…This policy does not apply to military or government entities…” As an example then, when the U.S. dropped the largest non-nuclear bomb in our arsenal (sickly nicknamed the Mother of All Bombs or MOAB) on Afghanistan, corporate media couldn’t praise the move fast enough. Be it referring to Donald Trump as “presidential” or the Fox News show Fox & Friends playing footage of the bomb dropping to Toby Keith’s “Courtesy of the Red, White & Blue,” the clear cut and grotesque promotion of large scale violence was blatant. And according to Twitter, totally fine.

But don’t forget, bombs are not the only state-sponsored and large-scale violence. How about the latest tax bill that will… 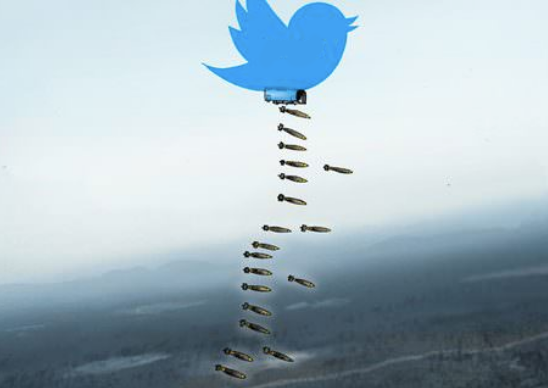 strip healthcare from ever more millions of Americans? Can the harm done against them not be termed “violence”? How about the fact that hundreds of thousands of our fellow Americans are homeless on any given night while others have wealth so vast they could never even begin to spend it all? How about the full-throated political backing of such destructive and violent policies as fracking, strip mining and drilling? Indeed, if I were to list most of the ways in which the state and its media cronies perpetuate violence, this article would never be finished. Luckily for my To Do list, Twitter has no interest in calling out the greatest purveyor of violence in the world. As Glenn Greenwald noted in a tweet on New Year’s Eve: “So telling that Twitter’s new prohibition on advocating violence exempts those who want govts or militaries to kill. Thus, “I want US Govt to nuke N Korea” or “Israel should obliterate Gaza”: permitted. But: “it’s justified for Muslims to use violence in self-defense”: banned.”

Another example of what could get you banned or suspended: being an angry woman. In October of 2017, Rose McGowan’s twitter account was suspended following tweets telling Ben Affleck to “fuck off” and accusing him of lying about his knowledge of the Harvey Weinstein assaults. Meanwhile, twitter accounts belonging to people who have told me I should be raped or killed (common responses to women speaking their mind online) are still around.

In short: the largest purveyor of violence in the world is allowed to openly glorify and call for death and destruction without fear of digital censorship. And this is not to say that fascists should be given an open platform. But banning some “small-time” fascists while allowing the fascists with nuclear bombs to speak loud and clear – is fucked up.

Meanwhile on Facebook, if you “free the nipple,” your account may be suspended. If you post home birth images, your account may be suspended. Alt-right? No problem. Britain First – the organization whose twitter account was suspended after Trump re-tweeted their false and grossly Islamophobic videos – still has a Facebook presence. In fact, before the new rules came out, in early December Twitter defended its decision to suspend the Britain First twitter account while NOT deleting Trump’s re-tweets “because we believe there is a legitimate public interest in [their] availability,” and because they want users to “see every side of an issue.”

I suppose then there wasn’t any “legitimate public interest” in the availability of tweets regarding DNC leaks during the 2016 election? According to Twitter there must not have been because in November of 2017, Twitter general counsel Sean Edgett, admitted in written testimony to the Senate Judiciary Committee that the company had ”buried” a full 48 percent of tweets using the hashtag #DNCLeak and 25 percent of tweets with the #PodestaEmails hashtag.

Really, why bother coming up with rules if you’re just going to decide willy nilly when and why to follow them?!

And while the Britain First Facebook account remains up and running, the activist collective Palestinian Information Center has seen several of its pages suspended – seven of them permanently – for, well, for being Palestinian. As the Intercept covered in a recent article, Facebook has been hugely helpful to the Israeli state in shutting down Palestinian activist and organizing pages and accounts.

Statestide, Facebook also deleted the account of Ramzan Kadryov, a brutal authoritarian mass murderer. Although, they didn’t delete his account because he’s a mass murderer but rather because the U.S government told them to.

In other words, “We don’t care if you’re horrendous. We just care whether or not you’re in good standing with the powers that be.” Twitter and Facebook want to maintain a cozy relationship with the empire while operating under an awfully flimsy guise of propriety, fairness and free speech.

As Glenn Greenwald put it in his article: “One can create a fantasy world in one’s head, if one wishes, in which Silicon Valley executives use their power to protect marginalized peoples around the world by censoring those who wish to harm them. But in the real world, that is nothing but a sad pipe dream. Just as governments will, these companies will use their censorship power to serve, not to undermine, the world’s most powerful factions.”

Neither Twitter nor Facebook have any real interest in actually removing calls for violence, hatred or terrorism from their platforms. They in fact seek to perpetuate all three by maintaining ties to the blood-soaked barons at the top. Their fleeting finger wags at fascists are like wrapping gauze around a patient dying of internal hemorrhaging as those in charge administer blood thinners.

Like so many other “resistance” and liberal leaning escapades in our nation, it’s all about making it look like you’re doing something – when in fact, those efforts not only achieve little to nothing but they obstruct a very real, very serious problem spreading throughout our body politic; in this case the fascist violence of the state and the complicity of corporate media.

If you’re looking for a social media presence outside the confines of Facebook and Twitter, I recommend checking out Mastodon (for those more Twitter inclined) and Minds (for the Facebook layout fans). Both are open source platforms that avoid restrictive censorship and algorithms.

(To continue the fight against censorship and suppression of antiestablishment news outlets, become a sustaining member by clicking the “membership” tab or join the free newsletter in the sidebar to the right.)

Nine CRUCIAL things that will NOT be talked about in tonight’s debate. 1) Money is debt. Every dollar…
byLee Camp
9 comments

2/16/2018  By John F. O’Donnell Believe it or not, the TALIBAN is now calling upon the American people…
byLee Camp
One comment