Lee Camp explains why the fact that even wealthy professional athletes are waking up to our corrupt + racist political system can’t be dismissed as hatred of President Trump. Lack of accountability in policing and the prison industry are systems of oppression that are upheld by the entire political establishment, including those funding the media. Lee also explains how the impending tax reform policy will be yet another massive transfer of wealth to the wealthy elite. This could not come at a worse time, since it is ultimately economic inequality that gives rise to social inequality. Naomi Karavani joins Lee at the desk to discuss Philadelphia’s success at decreasing their incarcerated population. Then Natalie McGill shows how Chicago is planning on spending millions to make law enforcement even less community based than before. 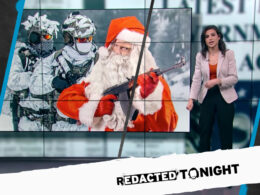 (Our reporting keeps going thanks to people like you. There are no corporate ads here. Become a member…
byLee Camp