My new book “Bullet Points & Punch Lines” is now available! It covers everything from the $21 Trillion unaccounted-for at the Pentagon to U.S. imperialist coups to climate change. It includes an intro by Jimmy Dore and a foreword by Chris Hedges. It’s comedy, politics, and revolution all wrapped into one. CLICK HERE to grab your copy. You can also read reviews of the book/my work below. Enjoy the book and please review it online!

“One of a handful of comedians keeping my father’s torch lit.”
—Kelly Carlin, daughter of George Carlin

“Lee Camp is not just a comedian. He challenges the
corporate war narratives and calls out the American
empire’s bullshit better than anyone. His passion
and anger are infectious and far too rare.”
—Abby Martin, journalist, host of The Empire
Files, former host of Breaking the Set

“Lee Camp is a rare prophetic voice in a field of formulaic
blowhards and political opportunists. He has the unique
ability to tear our political establishment to shreds, and to
then smash those shreds with a righteous hammer until
we see the elite forces that rule our lives in their truest
form—as an utterly hilarious farce of bipartisan idiocy.”
—Max Blumenthal, journalist, author of Goliath

“There is no better voice to analyze the bizarre combination
of absurdity and catastrophe facing us today than that
of Lee Camp. Drawing on his experience in both satire
and politics, Camp uses his critical insight and sharp
sense of irony to offer readers compelling political
commentary that is as powerful as it is witty.”
—Sophia McClennan, author of Is Satire Saving Our Nation?
Mockery and American Politics, professor of International Affairs
and Comparative Literature at Penn State University, and
founding director of the Center for Global Studies

“Lee Camp has found the hole in America’s brain
where reason has been replaced by Walmart. Lee’s
rants channel the gunk oozing out. You have to
admit, that’s why he’s so fucking funny.”
—Greg Palast, journalist, author of
The Best Democracy Money Can Buy

“Camp’s show is a master class in politically driven comedy.
Razor-sharp, witty, acerbic, and somewhat off-the-wall
at times, he delivers his on-point political and social
messages with the biggest dollop of humor going.”
—Steven Topple, The Canary

“For those comedy fans still in mourning for
Bill Hicks, you’ll find plenty to enjoy in the
work of DC-born stand-up Lee Camp.”
—The Guardian

“Like Jon Stewart from the Daily Show but with sharper teeth.”

“Lee Camp is an integral part of a long-standing
satirical tradition. He has the rare ability to
make you laugh and think simultaneously.”
—Paul Krassner, satirist

“Lee is the Che Guevara of comedy. Congrats to him on his
balls and integrity. Everything he does is so good. We need
more comedians with his kind of fearlessness. It’s so rare to
find such artful, thoughtful passion in comedy these days . . .
or in life. He’s waiting for a generation to catch up with him.”
—Paul Provenza, comedian, filmmaker, The Aristocrats

“Lee is totally inspiring. I kinda wanna
be like him when I grow up.”

“[Lee Camp is] developing a reputation for fearless political
comedy, with some calling him an heir to the crown of the
late, great George Carlin. He gets our seal of approval.”

“Gets the crowd roaring!”
—Rolling Stone

“A Time-Bomb of Reason ready to destroy anything that seeks
to pollute our culture and restrict our possibility as a species.”
—Peter Joseph (creator of The Zeitgeist Movement)

“Some of the best satire I’ve seen.”
—Scott Dikkers, cofounder and former editor of the Onion

“Lee has one of the funniest shows on
television. I watch it every week.”
—Jesse Ventura, former governor of Minnesota 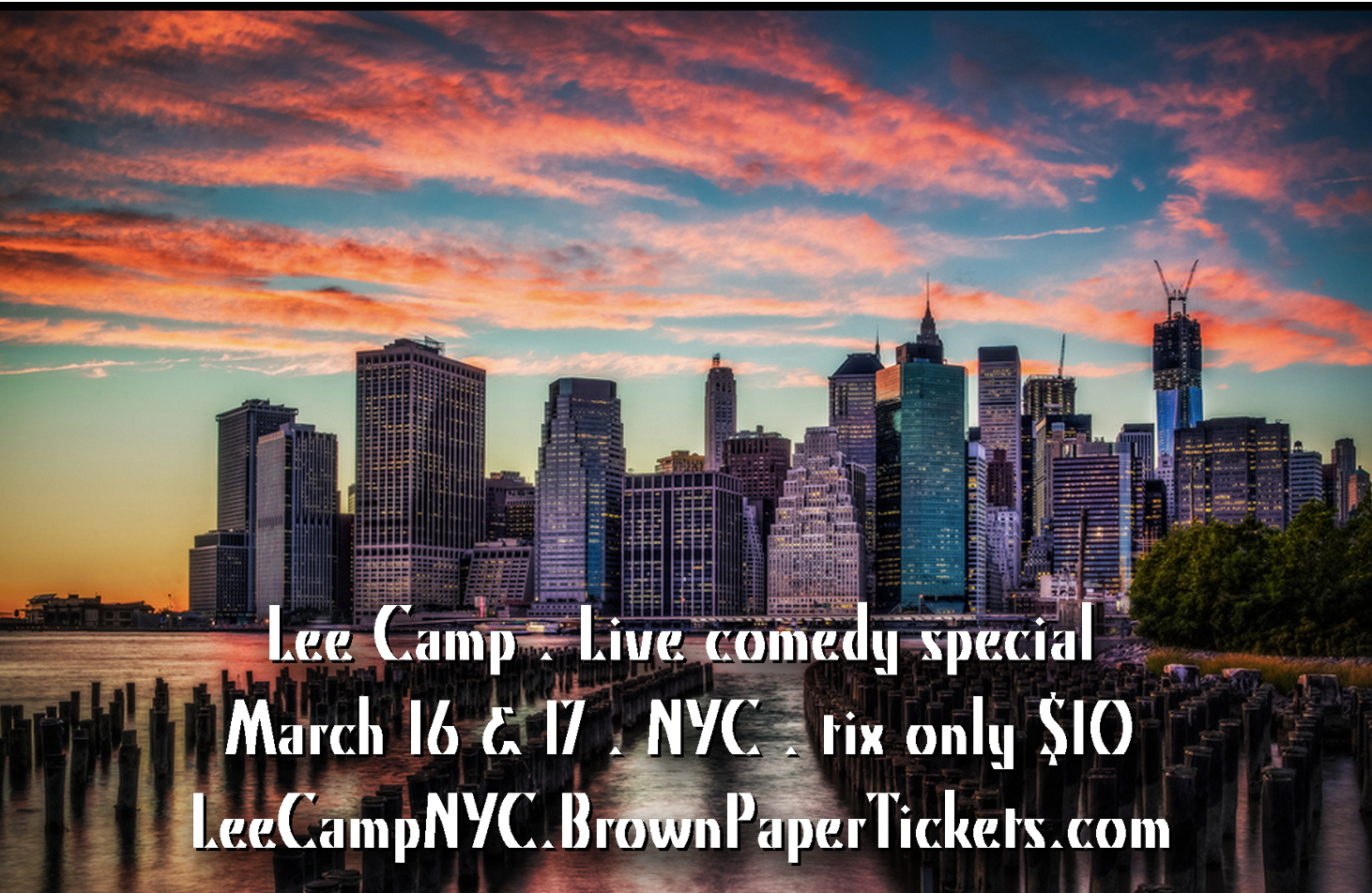 Taping My First Comedy Special in 2 Years in NYC!