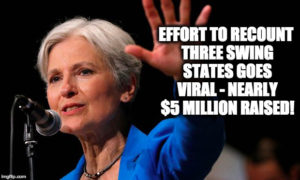 Presidential candidate Jill Stein’s efforts to fund a recount of 3 swing states have gone viral. The Green Party has raised nearly $6 MILLION in only a few days, and there has even been mainstream media coverage (unlike during Stein’s entire general election campaign). The Green Party says they are raising the money because there’s “compelling evidence of voting anomalies.” Much of the money is likely coming from Hillary supporters who would love to see the three swings states switch from red to blue – thereby giving the White House to Hillary and stopping the Pussy-Grabber-in-Chief-elect. Some have asked what Jill Stein and the Green Party get out of such a deal – considering how hard they’ve been on Hillary Clinton. Well, many believe that Stein garnered more than 5% of the vote nationally – even though the current numbers don’t suggest that. Getting above 5% has a lot of benefits for a political party. On top of that, there is the less cynical explanation that the Stein/Baraka Green Party simply wants to ensure the integrity of our voting system. I have talked in the past with Stein and her campaign manager David Cobb. David gave me this exclusive comment regarding the recount – “Americans are losing confidence in the integrity of our entire political system, including whether votes are even being properly counted. These recounts are NOT about trying to overturn election results. They are an effort to verify the reported results.”

President Obama is opposing the recount and pushing for the “peaceful transfer of power” that America is known for. (That’s the peaceful transfer of power from one big bank-controlled candidate to another.) Anyone who doubts that there could be election fraud, need look no further than the Democratic primaries. The Clinton Campaign happily colluded with the DNC to rig the primaries. (In fact on Redacted Tonight we covered how the DNC’s own lawyers admitted to rigging the primaries in court!) We CANNOT continue to trust a system in which we all vote on voting machines which are incredibly hard to verify and incredibly easy to hack. I covered the extensive election fraud seen in the primaries. You can watch that HERE, and HERE. I also covered how CBS news reported on how easily our voting machines could be hacked – but they waited until after the primaries to do so. I covered it here.

(Clinton is now backing Jill Stein’s recount effort. An earlier version of this article stated that she had not yet gotten behind it.)

But all of this is not to say that the general election was not stolen from Hillary Clinton. Honestly I don’t think we the people have enough information to know that yet (and we may never without an extensive audit). I spoke with two election experts who believe Hillary Clinton was indeed the winner on November 8th – Greg Palast and Mark Crispin Miller.

No matter who was the legitimate winner and who stole what, I think only good can come from making this a national discussion and at least attempting to recount these three swing states. Of course, who knows how you recount the counties where the machines have no receipts and no paper ballots. But you know, it’s only the heart of our democracy – Why should we care?

If you want to donate to Jill Stein’s effort, go here – jillstein.nationbuilder.com/recount.

(To get news updates like this straight into your inbox, sign up for free in the sidebar to the right.)