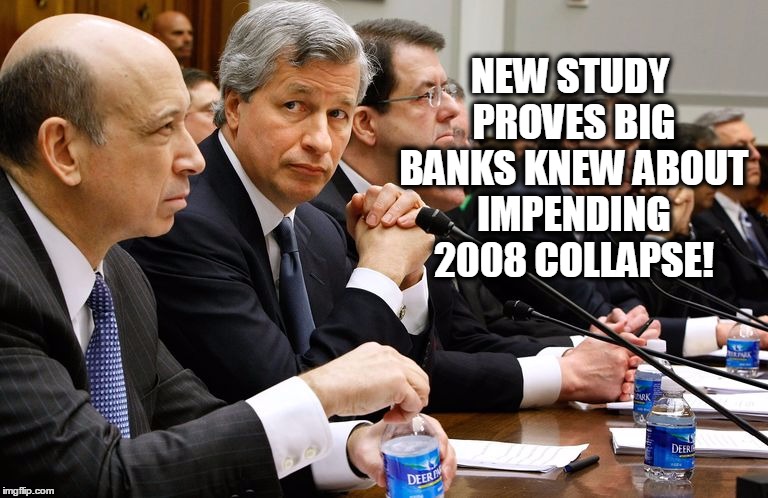 Two large studies from several universities used big data and math I’m proud to say I don’t understand to PROVE that A) government-connected insider trading was going on during the TARP bailouts and B) despite what big bank execs have said, they did INDEED see the crisis coming to some extent. These are both pretty groundbreaking revelations as reported this week by David Sirota. When the government was deciding where to send the BILLIONS of dollars of bailout funds, they were supposedly doing it behind closed doors. Obviously if people knew which companies would get the funds, then they could illegally trade on that knowledge. After charting 7,300 financial officers at 497 financial firms, the researchers found that those with government connections MIRACULOUSLY did quite well on the stock market during the bailout and traded much more than usual. Those without connections, did not do any better than usual. Another study showed that big bank execs were prepping for the pending collapse. One researcher said, “Our results suggest that insiders understood the heavy risk-taking in their banks; They were not simply over-optimistic, and hence they sold more of their own shares before the crisis.” Many bank execs have claimed “We never could’ve seen this coming! It caught us all by surprise!” …Well, we now know that’s bullshit. The big banks use the American people like chips at a casino. And luckily when they eventually and predictably lose, they can count on the taxpayers to bail them out.

Wall Street is rigged in more ways than one. It serves to make the rich richer and the poor poorer. None of the gains from the so-called “recovery” have gone to the 99%. They have ALL gone to the rich. This rigged system is eating our planet alive, and these studies serve to prove just how thoroughly we the people are being played. Millions lost their homes, their jobs, and their pensions in the 2008 collapse. And WHILE that was happening, the ruling elite were stuffing their pockets with money.

As I covered on Redacted Tonight, Goldman Sachs paid practically nothing for their role in the crisis.

Keep Fighting,
Lee
(If you want exclusive content like this in your inbox, sign up for the free newsletter in the sidebar to the right. You can also sign up by texting the word ‘REDACTED’ to 444999.)

(Our reporting is being suppressed by F-book, Google, and YouTube. But we keep fighting thanks to heroes like…
byLee Camp

2/22/2018 by Natalie McGill A Food and Water Watch study confirms what we’ve known for some time: (A)…
byLee Camp