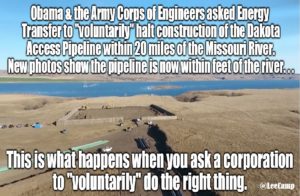 Well, the Dakota Access Pipeline may now be saying, “Reports of my death have been greatly exaggerated.” In September some reported that the Obama Administration and the Army Corps of Engineers had stepped in to halt the construction of the Dakota Access Pipeline within 20 miles on either side of the Missouri River. However, many at the time noted that the request to halt construction was just that – a request. It asked that the company behind the billion-dollar pipeline, Energy Transfer, “voluntarily” stop the pipeline for 40 miles around the river that supplies millions with clean water. Well, as you can imagine, corporations don’t ever do the right thing “voluntarily” – especially when it involves losing millions, if not billions, of dollars. And so new drone footage has revealed they did not halt construction at all. In fact, the images show the pipeline is within feet of Lake Oahe and the Missouri River.
On my show “Redacted Tonight” we’ve covered the police brutality against water protectors trying to stop the pipeline. We’ve also covered the assault on journalism and reporters including the horrific shooting of a reporter with “less than lethal” rounds DURING AN INTERVIEW. And we’ve covered how this not only a Standing Rock Sioux issue. The pipeline stretches hundreds of miles, and I interviewed Cyndy Copolla – an Iowa woman who was arrested ON HER OWN FARM for getting in the way of the construction crew.

To get news updates like this straight into your email inbox, either sign up in the sidebar to the right or text the word ‘REDACTED’ to 444999. It’s free. 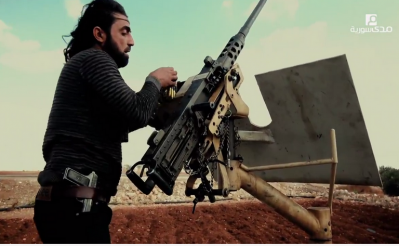 I’m going to be headlining in Baltimore at the Ideal Arts Space on July 23rd at 8:30pm. Get…
byLee Camp
No comments

So REAL journalism has been outsourced to the Reddit community, and today it seems they discovered something potentially…
byLee Camp
One comment