The billionaire mayor and dictator of NYC Mike Bloomberg said that drones are an inevitable part of our future. He said, “It’s not a question of whether it’s good or bad. I just don’t see how you can stop them.” Really? THIS from the guy who thinks he can stop obesity?! He has picked perhaps the greatest talent America has to offer (getting fat) as the issue he thinks he can tackle. Yet at the same time he says we should have no say as to whether unmanned drone aircraft (which will soon be smaller than Tom Cruise’s humility) can spy on us constantly?! The interesting part of this is that the people with the most evil shit to hide are probably the Wall Street titans. So once the drones are everywhere, the next question will be who has access to what they find. Sure, the unmanned spies might catch photos of Occupiers shitting on a police car, but I imagine they’ll also catch images of people like Michael Bloomberg, Jamie Dimon and Lloyd Blankfein shitting on the United States.

What do you think? Are drones inevitable in US skies?

Jacquie Luqman is a journalist and host of the radio-news show "By Any Means Necessary." Lee Camp and Luqman connect to discuss the 2020 election, the upcoming presidential transition, the corporate media's place in protecting US imperialist policies, the censorship of alternative voices on social media, the experience of black people in the US, and more.
byLee Camp 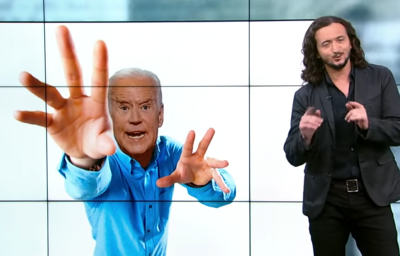 Join the free email list by texting the word “REDACTED” to 444-999.
byLee Camp