I know this might not mean much for a lot of people, but if I weren’t white, Jewish,…
byLee Camp 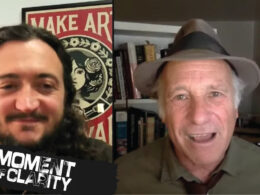