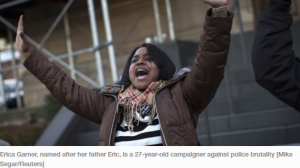 Activist Erica Garner has died after a heart attack on December 27th. This was her second heart attack after giving birth a few weeks ago. Erica is the 27 year-old daughter of Eric Garner who was killed by NY police using an illegal choke hold. The arrest and take down of Eric Garner was precipitated by the fact he was selling loose cigarettes on a street corner. Erica became an outspoken activist after her father’s death. The hashtag #EricaGarner has been trending worldwide.

The officers responsible for Eric Garner’s death were not indicted by a jury. This follows a long precedent of not imprisoning police officers who murder unarmed civilians, even when those officers have a long list of previous complaints. However, one person was punished after Eric Garner’s death – the man who filmed it. Ramsey Ortega is now in jail and says he has been continually targeted by police for the video of Garner’s murder (that went viral). This also follows an extensive history of police going after and punishing those who film police brutality.

(For more news updates like this, join the free email list in the column to the right.)

By Kit O’Connell Many countries have made net neutrality a basic freedom. Yet now, the FCC is planning…
byLee Camp