Lee opens with Attorney General Jeff Session’s stance on criminalizing drug users and dealers which seems practically braindead considering the success of the so-called “War on Drugs.” Then Lee gives a short history of the chaos and farce that is and was the Drug War culled from recently declassified documents. From the loony plot to assassinate Castro through coordinating with a Cuban mafia drug trafficker to the LSD mind control experiments, the Drug War seems like just plain covert war. But the War on Drugs is waged not only on the citizens of another country, but also on the home front against our own citizens. Then Lee covers the absurdity of other recent news stories. The plans to open a FoxConn plant in Wisconsin shows how proud this country is of not paying workers enough money for their labor. No doubt that this Apple product manufacturer’s best offering will be jobs with few protections for its workers, while FoxConn’s corporate suits get huge tax breaks. Lee Camp expands on how corporate America continues to screw American workers, and especially the female workers. Black females are the most exploited class of workers in America, where the wage gap is more damaging than ever. Meanwhile, our country’s defense contractors continue to rake in the big bucks because our administration arms Saudi Arabia with the weapons to destroy Yemen and kill innocent civilians. Then Lee moves onto the plans to “fix” Venezuela’s democracy which is a country with the largest reserves of oil in the world. Could it be just a coincidence? In the second half, correspondent Naomi Karavani joins Lee at the desk to discuss the “oil to school pipeline.” Big Oil is funding and writing science curriculum extolling the virtues of oil through friendly cartoon character like “Petro Pete.” Finally, correspondent Natalie McGill reports on the 50 active sites across our country where ammunition and weapons are burned in the open air, spewing cancer causing chemicals into nearby into low-income and mostly minority communities. This and more on Redacted Tonight. 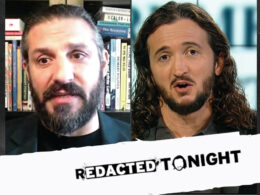 Redacted Tonight #319 – REVEALED: The Rich Gain Billions While Workers Are At Food Banks

The wealth of the richest people in the world has increased during this pandemic. Lee Camp delivers the facts on growing inequality and tries to help you understand how horrific this crisis has been for regular people in the US. These unbelievable profits come through mass exploitation and a lack of caution for the health of workers.
byLee Camp

US Found To Be Shipping Arms To Venezuela [VIDEO]