Redacted Tonight 152-How America Is Being Sold Off, Richest 5 Men Own Half The World & More

Lee Camp reveals what’s in store for the future of our nation’s infrastructure. Things are looking grim, as Trump plans for wide-scale privatization of our bridges, tunnels, and roads. This means our travel, safety, and health will be put into the hands of corporate entities that care about profit well above our well-being. Lee also delves into how our country is being sold for parts to foreign conglomerates and nation-states. Then Lee moves on to discuss a shocking new report on how the world’s wealth is becoming even more inequitable. The 5 richest men in the world now have the same amount of wealth as HALF OF THE WORLD’S POPULATION. That’s 5 people with as much as 3 BILLION PEOPLE! Beyond being a psychotic representation of greed, it’s also incredibly unstable for the world. In the second half of the show, correspondent Naomi Karavani joins Lee at the desk to discuss leaked documents that expose a conservative foundation’s plan to consolidate power. It’s the Bradley Foundation and their tactics include crushing unions, especially in blue states where they wield an enormous amount of power. The Bradley Foundation influences the government to pass so-called “Right to Work Laws” and breaks apart unions, all while operating under the guise of being a charity. Finally, correspondent Natalie McGill investigates how a chemical that scientists acknowledge is very harmful to human beings is somehow in countless everyday products we use. They’re known as PFCs and they’re a dangerous, unregulated substance. But that doesn’t keep them from being in your shampoo and water. All of this on the new Redacted Tonight! 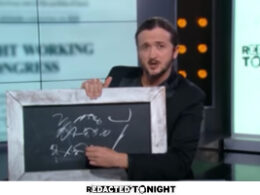 (Please sign up for the free email list or become a member in the sidebar to the right.)
byLee Camp