Lee Camp delves deep into Net Neutrality, a.k.a. the fight for a free and open internet. Lee explains all of the new pushes by the telecoms and the FCC to undermine internet freedom, one of which is them going so far as to actually call their attempts at crushing internet freedom, you guessed it – INTERNET FREEDOM. It’s Orwellian and sick. Lee goes on to shred the head of the FCC, Ajit Pai, by tearing into video footage of Pai being an absolutely ridiculous, villainous corporate tool. Lee then explains how important maintaining Net Neutrality is. He discusses how an open internet is why movements like Black Lives Matter, the Bernie Revolution and Occupy have been able to even exist. In the second half of the show, correspondent John F. O’Donnell joins Lee at the desk to talk about the insurmountable financial crisis Puerto Rico is dealing with. They’re currently crippled by $123 billion in debt. And the dirty little secret is, in large part, this is because Puerto Rico has been colonized and exploited by the U.S. for over a century. Lee and John expose the redacted reality. Finally, correspondent Naomi Karavani files a report based on a new study about how money in politics influences politicians. We all know money in politics is corrupting our system, but this study now actually has the data. It focuses on two issues: Dodd-Frank financial regulation legislation and Net Neutrality. This and more on Redacted Tonight! 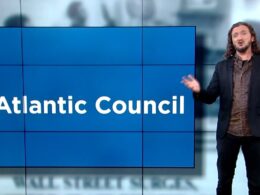 The Rich Are Literally Stealing Blood From The Poor [VIDEO]

The Business of Endless War Explained In 2 Minutes [VIDEO]