After opening for acts such as Helmet and Tom Morello in her band Rooftop Revolutionaries, Eleanor Goldfield has launched her solo debut EP, ‘No Solo,’ which consists of three original songs and two spoken-word pieces. It’s a far cry from her political hard rock sound in Rooftop Revolutionaries, but the queer creative radical, journalist and filmmaker’s versatile sound still comes with a bruising impact.

The single, ‘Pyre’, is the perfect introduction to her visceral songwriting style. The enthralling slice of Americana lays its foundation in swampy bluegrass roots, while the easy acoustic guitar chords bring a light accordant air of singer-songwriter country folk. While tackling themes of damnation, the radical track unapologetically forces into consciousness the destruction that collectively surrounds us while speaking to your soul with a recognition that only exceptional songwriters can achieve.

With lyrics such as, “What do you live for if they’re dying to kill for a dime?”, if you don’t feel something listening to Pyre, you may want to check you’ve still got a pulse.

Eleanor Goldfield’s debut EP is now available on her website.

They Want Us All Living In Pods (Redacted Behind The Scenes)

(Help us keep going & fight censorship! Sign up for the free email list or text the word…
byLee Camp
2 comments 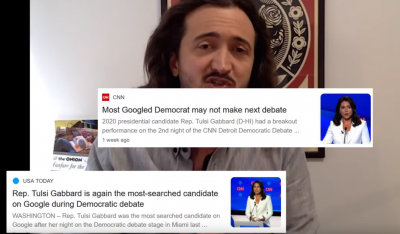