Pennsylvania Proven To Be Poisoning Their Own People

“No one is doing their job to protect the people of Pennsylvania. We’re out here on our own.”

Elise Gerhart sounds stressed and tired – but resolute. She and her family have been battling the Mariner East 2 pipeline for more than two years through both legal and direct action. In 2016, the pipeline resistance camp known as Camp White Pine began – deploying tree-sits in trees marked for clearing. Going up against Sunoco and their subsidiary, Energy Transfer Partners, the same company behind the Dakota Access Pipeline has been intensely taxing, in all senses of that word. Surveillance drones and helicopters, private security thugs, legal threats and action, character assassination, death threats and mysterious visitors to the Gerhart’s home have become the norm.

When Elise says they’re out there on their own – it’s true both literally and figuratively. The Gerharts and the people going to camp to support are fighting more than just a pipeline. They’re fighting apathy, censorship, corruption and collusion as well. Without much media coverage and without any real help from officials and the legal system, the fight for people and planet is too often a lonely one. It’s also very often remote – away from the hustle and bustle of a city that could provide more visibility and pushback.

The area of Pennsylvania where Gerharts property and Camp White Pine sit is rural – and deceptively picturesque. Home to the Marcellus Shale and the fracking boom it catalyzed, Pennsylvania is also home to rolling hills, streams, farms and fields dotted with little schoolyards and modest homes. When you look closely though, you’ll see the scars of the oil and gas industry. The rolling hills bear shaved ridges and yellow markers warning of pipelines underneath the surface. Hundreds of families with wells on their property get water delivered to their homes because their well water is varying shades of brown and foul-smelling. And those are only the families that could afford it. The others abandoned their homes. Stories of crops dying as soon as they were planted, sludge seeping into backyards and illnesses ranging from rashes to cancer are far too common. What’s also horrifyingly common is Pennsylvania Department of Environmental Protection’s laissez-faire response. A 2017 report by Public Herald shows that of the drinking water complaints filed by PA residents, the DEP considers 94% to be wholly unrelated to the oil and gas industries. In other words, the DEP claims that the water of thousands of PA residents living close to fracking operations is being poisoned by… gremlins? The DEP apparently sees no need to either answer that question or reign in the fracking industry that’s always at the scene of the crime.

(Our media landscape is a pile of crap. If you like what you see here, please chip in $5 a month by becoming a sustaining member  – the same cost as two coffees per month. You can also give one-time donations in the sidebar to the right. )

The report reviewed more than 1,000 water complaints and found that the DEP goes above and beyond mere negligence. As one resident put it, “I think the state is in bed with the gas companies. My husband calls them DGP – Department of Gas Protection – because that’s what they’re about. To hell with us.” Her hunch is spot on. According to a 2016 report by Common Cause Pennsylvania and Conservation Voters of PA, between 2014 and 2015 alone, the natural gas industry contributed $2.7 million to political campaigns in the state and spent about $17.5 million lobbying. This kind of direct bribery explains why the DEP has not only ignored water complaints but why it’s shrugged at the Mariner East 2 project spilling 90 times in 42 distinct locations amounting to 202,000 gallons of leaked drilling fluids – and it’s still only in the construction phase. Indeed, the entire regulatory and permitting process for the project has been a joke. Despite the fact that 350-mile long ME2 pipeline would carry highly explosive compressed liquified gasses, it’s only subject to the federal Pipeline and Hazardous Materials Safety Administration’s safety standards governing uncompressed liquids such as methane and flammable liquids – which are less volatile. For instance, in 2016, a methane leak due to a ruptured pipeline, destroyed a house 200 feet away and severely damaged a home 800 feet away. A man inside sustained third degree burns. Still, that was just methane. When the compressed liquified gasses leak from a pipeline like ME2, they immediately convert to gas and disperse at varying rates, making containment impossible. Simply turning on a light switch could trigger an explosion miles from the leak point. A 2016 FracTracker report shows that more than 100,000 people and 40 schools are in the blast zone for the ME2 pipeline. Regardless, ETP enjoys public utility status meaning that they can seize land via eminent domain, operating under the guise of delivering a necessary public utility. How an ecologically and economically disastrous pipeline bound for an export facility bound for foreign markets amounts to a local public utility is an answer no public official seems able to answer.

Ongoing public pressure did finally force the DEP into action earlier this year. In January, the DEP suspended ETP’s construction permits citing permit violations which included even more spills and horizontal directional drilling at sites they had no legal right to drill at. A flimsy reprieve, the work stoppage came too late for many as construction had already damaged many waterways and poisoned drinking water. About a month and $12 million later, ETP got the go-ahead to carry on with construction and marked the occasion by dumping toxic sludge into landowner’s backyards. Meanwhile, in March, ETP’s existing natural gas liquids pipeline, Mariner East 1, was temporarily shut down due to the emergence of numerous sinkholes along the pipeline route. The Mariner East 2 project, however, was allowed to continue.

It’s important to note that the aforementioned incidents are only a cherry-picked selection of horrors. Still, to understand the current situation and the ongoing battle against the Mariner East 2 pipeline, some context is needed. (More backstory & coverage on the ground can be seen on Episode 125 of Act Out!) Any pipeline is unacceptable and unnecessary. But shoving a pipeline through a state that has been and continues to be ravaged by the oil and gas industries – is nothing short of ongoing ecological rape for corporate profit. But the fight continues.

In the early morning hours of Sunday, April 8th work crews arrived on the Gerhart’s property and cut down three trees and a monopod that had stood since the initial tree-clearing began in 2016. A few days later, workers and security crews showed up to fell trees on a neighboring property belonging to Rod Roberts, a wealthy landowner who bought up property in the area at the start of the fracking boom. All workers and security refused to identify themselves to landowners and on the warmest day of the year so far, workers wore masks to further obscure their identities. Based on previous knowledge, there’s a good chance the security firm is TigerSwan, the now infamous jacked-up private security firm that used counter-terrorism tactics to infiltrate, surveil and attack water protectors at Standing Rock who were fighting ETP’s other project, the Dakota Access Pipeline. In November of 2016, TigerSwan received a license to operate in Pennsylvania and the Intercept reported in June of last year that the company has had a presence in the state since at least April. The surveillance tactics seen at Standing Rock have been noted at Camp White Pine as well including drones and low-flying helicopters. When the masked workers showed up, the helicopter returned as well. A couple of small shacks were also set up where workers and security stayed overnight. As of the writing of this article, workers and security still have not identified themselves and refuse to answer questions even pertaining to the legality of their actions. When Ellen Gerhart approached them and asked for a waiver that gives special permission to cut trees after March 31st, in accordance with the Endangered Species Act and the Migratory Bird Treaty Act, she was further ignored.

The situation is dire but the fight is not over. “Energy Transfer Partners always operates without the ability to imagine the perseverance and dedication of the people who oppose it,” a Camp White Pine Facebook post from April 11th notes. When I spoke to Elise she re-iterated this message and added “We have to fight it. People can do more than they think.” She said it’s our collective responsibility to take a stand, that those with privilege should use it in these fights because regardless of who you are, you are affected by the oppression and destruction meted out by these companies. There are ongoing legal actions regarding water contamination and eminent domain and this coming weekend, Camp White Pine will host an Earth Day celebration to plant new trees and renew the fight for people and planet in the face of corporate destruction. In the midst of the fight, the plan to build is always present. Elise started her Earth Day celebration early by planting a tree she named “ol pain in the ass,” remarking that it was part of her 50 year plan.

Lonely though the front lines may be, the company couldn’t be better. And as we’ve also seen with the ongoing tree-sits against the Mountain Valley Pipeline, a small group of dedicated people can make a big difference. No company, no dirty energy project is insurmountable. Before hanging up the phone, Elise closes with a simple but loaded phrase: “Keep saying no.”

(Our reporting is being SUPPRESSED by Facebook, Google, and YouTube. But we keep fighting thanks to heroes like you becoming sustaining members for as low as $5 a month – the same cost as two coffees. Two coffees per month. You can also give one-time donations or sign up for the free email newsletter in the sidebar to the right. ) 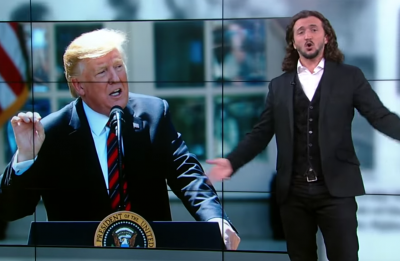